Fantagraphics has announced they're pushing back the release date for Stephen Dixon's book of uncollected stories to Aug. 24th from the originally scheduled May release.
Needless to say, this is very bad news.
Posted by andy linkner at 5:46 PM No comments:

Jan 25, 2010
Just read a fun and quirky chapbook by Aaron Burch called How to Take Yourself Apart, How to Make Yourself Anew. Written as a cycle of prose poems in the form of instructions in a "How-to" manual, the whimsical quality of these pieces reminded me of Eric Chevillard in their stretching of reality into some fascinatingly unreal shapes.
Posted by andy linkner at 3:23 PM No comments: 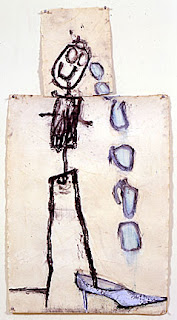 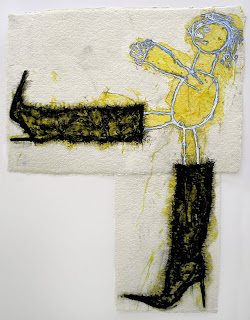 These are two works on paper panels in oil and charcoal by New York artist Ida Applebroog from a rather large series called Fancy Shoes. (Click on images to enlarge.)
Posted by andy linkner at 4:27 AM No comments:

Two in the Most Eagerly Awaited Catagory

I am very excited about the upcoming publication of a book each by two of my all time favorite writers, Stephen Dixon (What is All This) and Thomas Bernhard (Prose). Both are due out in May.

The Dixon is a 900+ pg. tome of his previously uncollected stories and is from Fantagraphics.

The Bernhard is the first English translation of his 1967 collection of short fiction (also titled Prose) and is from Seagull Books.

Posted by andy linkner at 6:56 PM No comments:

Jan 15, 2010 04:39PM
How Some People Like Their Eggs, a chapbook of flash fiction by Sean Lovelace, was very nice; smooth, breezy and lightly whimsical Lovelace's voice convey's the complete assurance of a master craftsman. I agreed with Roxane Gay over at Pank magazine (http://www.pankmagazine.com/pankblog/?p=... ) about the standout story being "I Love Bocce".

Jan 17, 2010 11:40PM
Read another flash fiction chapbook by yet another very talented young writer, Mel Bosworth, called When the Cats Razzed the Chickens. Well crafted and mostly in a whimsical vein but at only 23 pages this book almost just whets the appetite for more from this source.

Partial List of People to Bleach by Gary Lutz 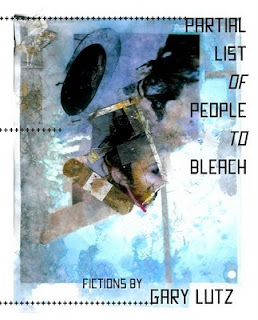 I finally got around to reading this story collection by the highly touted Gary Lutz and was dazzled by his aggressively creative verbal formulations and bizarre happenings. Not one much for subtlety is he. There is a lot of unconventional coupling going on (brother/brother, aunt/nephew, husband/boyfriend, etc.) and a lot of neologistic types of wordplay and other linguistic hi-jinx. I at times debated in my mind the possibility of this being more flashy technical brilliance and wit than real substantive literature, but it's such a lot of fun being continually amazed by what the guy will dream up next I didn't really care. So maybe best in small doses but certainly not to be missed.
Posted by andy linkner at 7:08 PM No comments:

The Late Work of Margaret Kroftis a novella by Mark Gluth 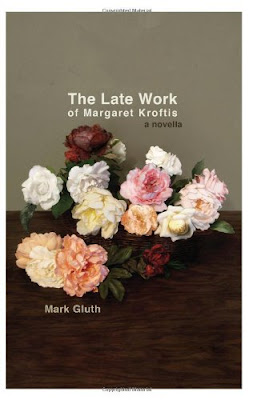 A beautiful book, suffused with deep melancholy. The writing is extremely spare, indeed, some of the most minimalistic I've encountered (the comparison with Agota Kristoff on the back cover--especially the first part of her trilogy, The Notebook-- is apt). There is an accumulating of emotional intensity conveyed by the chains of very short, simple delarative sentences which is quite dreamily incantory, even magical.

Mark Gluth is another tremendously talented young writer on the scene belying the pessimism expressed in so many quarters about the future of American book culture.


I respectfully disagree, however, with one reviewer over on the Goodreads website who suggests this book can easily be read in an afternoon. I found the emotional buildup frequently to be too much all at once and needed to take beaks to relieve the tension and reflect on what I was reading. I think a couple of days reading time is more realistic.
Posted by andy linkner at 11:54 PM No comments:

Dec 25, 2009 01:27AM
Finished British poet George Granville Barker's The Dead Seagull, a fictionalized account of the beginning of his long on/off love affair with the Canadian poet Elizabeth Smart. The writing is very highly wrought, dense with symbolism and imagery from classical mythology and Barker's Roman Catholic roots. Intense, stormy, and romantic, it's simultaneously elevated and tawdry, I enjoyed it a lot. Now reading a sequence of prose poems by Daryl Scroggins: The Game of Kings.

____________________________________________
Dec 25, 2009 10:56PM
Really, really liked Scroggins' The Game of Kings. And the eight page interview with the author at the back of the book is just as absorbing as the fictional content. This writer from Dallas combines tremendous imagination with great subtlty and fascinating word choices and sentence structure. I don't really know what qualifies this as "prose poems" rather than just prose, perhaps it's the compression of so much being said in so few words but I admire it all the same. What a shame there is so little of Scroggins' fiction writing in print.

Dec 28, 2009 02:54AM
Now reading Mac Wellman's story collection A Chronicle of the Madness of Small Worlds. Wellman is far better known for his award winning plays than for his fiction writing though he also has three novels to his credit. The stories is this book display wildly antic and absurdist flights of fancy reminiscent Gombrowicz's Ferdydurke or Flann O'Brien's The Third Policeman. The settings are various small planetoids in the asteroid belt which are inhabited by some very peculiar human type characters who say and do some very peculiar things. Clever neologisms abound and it's all some pretty far out stuff but Wellman, for the most part, succeeds with his verbal highwire act. It's quite fun. Also reading Barthelme's Amateurs and am struck by the purely comedic aims of many of these stories as opposed to structural and linguistic experimentalism in so much of the other collections. "Some of Us Had Been Threatening" and "What to Do Next" were, I thought, especially brilliant examples from what I've read so far.
Posted by andy linkner at 4:19 AM No comments: 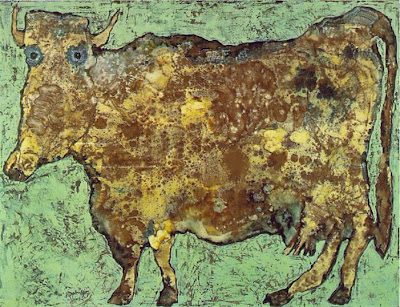 My all time favorite cow painting.
This one's by Jean Dubuffet from 1954.
Posted by andy linkner at 9:41 PM No comments: 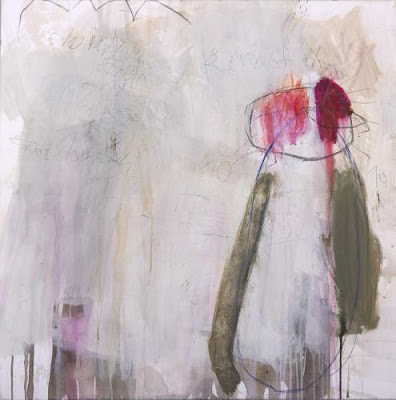 This painting hangs on the wall facing me just above and to the right of my computer screen and consequently, I spend a lot of time communing with it. Purchased in San Antonio, TX at Anarte Gallery. The painter is Gabriela Proksch from Austria. The title is from the opening line of a poem by Goethe..."Do you know the land where the lemon trees blossom?"...

Posted by andy linkner at 3:54 AM No comments:

Jan 02, 2010 05:26PM
I quite liked Jamie Iredell's Prose. Poems. A Novel . It's another of these longer fictional works composed of fragments, vignettes, etc. presented more or less randomly but which come together to form a unified whole analogous to a novel. I seem to have been gravitating more to this literary form lately and so far have been most impressed by Ken Sparling's and Daryl Scroggins' examples. The Iredell is very well done in terms of the writing; creative sentence structure, language and imagery, but I still see this much more as distinctively stylized prose than the "prose poems" referred to by most reviewers. The characters and situations in this book are somewhat offputting to me with scenes of drunken mayhem and self destructiveness .

Jan 05, 2010 05:47AM
Jeremy M. Davies' Rose Alley has impressed me with its extravagance, its exuberance, its erudition and the virtuosity of its highly elaborate language. Paul West comes to mind as does Georges Perec's Life: a User's Manual as examples of writers exploring similar stylistic paths. There's a fair amount of work involved in following Davies' oddly twisting sentences and the ideas contained therein, but the effort is amply rewarded.

Jan 06, 2010 03:53PM
I'm all excited about Shane Jones' The Failure Six because it's so much fun. Wonderfully creative writing; very dreamlike and mysterious. Jones excels at surprising the reader with just about every sentence that comes along. A terrific little book.

Jan 08, 2010 07:07AM
I don't read all that much fiction by women that focuses on specifically women's concerns but I really liked Claudia Smith's chapbook sized short story collection Put Your Head in My Lap which is primarily that kind of writing. She doesn't in any way try to dazzle with linguistic virtuosity or flights of imagination. Her stories are beautifully simple, subtle and affecting and are frequently about women coping with the after-effects of tragedy or failed relationships. But among my favorites were actually several very upbeat and life affirming narratives. Very good stuff.
Posted by andy linkner at 2:16 PM No comments: