Two Poems by Clark Coolidge (from the collection Own Face) 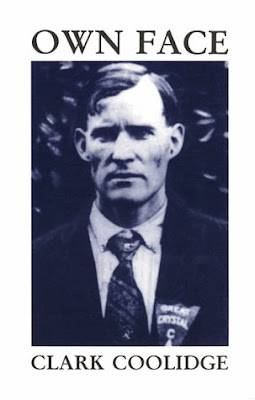 The Icing Up It Turns To
for M.P.'s without music


When, meaning where, will the wire go down,
meaning would, beneath the portion of tree,
substitute cracking, effected by the lower
portion, mood, of the sprung cloud, signifying
an uncompleted lace or lack of power.
A lash of wisdom for the bending.


But It Says Nothing


But it says nothing. And one is as quiet
as if to say nothing moves me. Then
there is the chair. And one speaks of
the chair sitting at the table.
Scraping against surfaces, opening the mouth.
The object is a piece of thing before. One
shifts in a chair and opens the talk.
And the time it says nothing one moves.
The table is too long as the wall. Not
a thing but it stays and one opens
as a mouth will begin. Speaking of
the table, nothing but to avoid that
of the wall. One could return over and over
to the chair, the wall one is sitting at.
Least ways it says nothing. And the
thing is, it stays still before
speaking of. The object of nothing, even
speech.
Posted by andy linkner at 3:10 AM No comments: